Singer, entrepreneur and mental health advocate Ananya Birla is using her privilege purposefully to pave her own multi-hyphenate path and spread kindness along the way

Singer, entrepreneur and mental health advocate Ananya Birla is using her
privilege purposefully to pave her own multi-hyphenate path and spread kindness
along the way 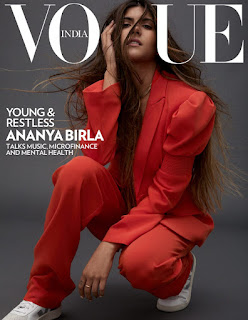 Last night, Ananya Birla landed in New York, a quick stopover for Vogue India. Tomorrow she flies to Nashville for “a music boot camp” of sorts, to bust out tracks from her new album out this summer and another album with Hindi and English songs that will be ready for Diwali. Then she’s scheduled to record the national anthem with the legendary AR Rahman for the Olympics (“I’ve been doing riyaaz every day”) and by mid-April she hopes to be back in Mumbai for her mum’s fiftieth. “Nothing can make me miss my mum’s birthday,” she says with widening eyes, “not even a Grammy!”

SOUND OF MUSIC
Birla’s focus to strike out independently, rather than piggyback on her family legacy, is admirable. What pushed her to carve her own career? “My childhood was very sheltered. I had a curfew and a bodyguard. I felt a lot of pressure to be this perfect kid. I felt claustrophobic trying to live up to what I thought the world wanted me to be. But it also led me to pursue my dreams and become the person I wanted to be.” She had to unlearn what she didn’t believe in and pave her trajectory: “Music made me feel like I fit in somewhere. It made me feel understood. It took away the loneliness and gave me something to call my own.”
At 22, Birla left her studies and signed a record deal with Universal Music. “Growing up, everyone expected me to go to this amazing university, get a degree, get married to someone well-off and have kids. But I was the total opposite, I had a different way of thinking. And my parents always supported the path I picked.”
With a string of platinum singles and collaborations with artists like Sean Kingston, things were going well. But Birla was thinking of the bigger picture: “I felt I’d made a footprint in India but I wasn’t progressing as an artist,” she muses. Her next goal was global recognition and there was only one place to go from here: Los Angeles. So, at the end of 2019, she packed her bags and moved to the other side of the world.
In November, she dropped the ‘Everybody’s Lost’ video showing a sexier, edgier side to her personality; it got over 25 million streams. Dressed in a black leather bustier and thigh-high boots, it felt like she was finally letting loose. The video sparked several ‘You are spoiling your family’s reputation’ comments and even a ‘This is soft porn’, which Birla laughs off. “My mum was on set with me the whole time,” she says nonchalantly. “As the next generation of a highly conservative business family, my parents and siblings are not as conservative as the world thinks we are. We have our morals and values, but we are not closed-minded.” In fact, her dad was so proud that he played the acoustic version for all his employees at the Aditya Birla Group Awards. “That’s a big deal,” she admits. There’s also Kumar Mangalam’s loyalty for picking her songs as his caller tune and her photos for his WhatsApp display picture. “Always,” she reiterates, holding up a glamorous headshot saved under ‘Pa’. “My family sees how badly I want this and they appreciate how far I’ve come.”

DRIVEN TO SUCCEED
Last year, while most of us were baking banana bread, she created the Ananya Birla Foundation. “It’s my pandemic baby,” she explains. “When people ask, ‘What new skill did you learn?’ I say I started this foundation.” It supports a variety of philanthropic causes, from COVID-19 relief and helping migrant workers to teaming up with organisations like SAFA and Save The Children. “We are even doing a research project with students from the London School of Economics to see where mental health stands in rural India,” explains Birla, who co-founded Mpower, a mental health initiative, with her mother in 2016. “I’ve had, and still have, a huge struggle with my mental health,” she admits. “There’s such stigma around it and it won’t go away. We have to make a continuous effort.”
She continues, “My foundation is a way of reaching out to people, to spread kindness and reduce someone’s suffering daily… It takes away a lot of guilt that I feel about where I’ve been born.” She is aware of her privilege but won’t take it lying down: “God has given me so much. I feel a lot of self-induced pressure. But this pressure drives me to do more,” she adds.
And if her résumé wasn’t extensive enough, she also owns Ikai Asai, a crafts-focused design brand that specialises in tableware. “It’s about the beauty of handmade products that are raw, authentic and imperfect. Every piece tells a story, just like my songs. ”

MIND OVER MATTER
“I know my mother still wants me to complete my undergraduate at some point,” she says with a pause, “but I personally don’t need a stamp or certificate. I think we are all students on a daily basis.” These days, she’s in the midst of an online course on the science of well-being. “I want to focus on understanding my brain; I’ve had a huge journey with my mental health.”
Over the years, Birla’s found discipline—working out and journaling helps beat the depression. Living under the scrutiny of social media, Birla’s learnt the hard way that with the good days come the bad, and with the fans come the haters. “My parents say success and failure are just two sides of a coin. You can’t take either too seriously…it could all just change in a minute. Failure is a part of success. That’s my big learning.”
She’s now ready to put the record straight with a documentary capturing her everyday life. She may be an heiress, but unlike the super-rich kids of Bling Empire, her happy place lies between the simpler things—a cup of Girnar masala chai, her dogs, guitar, notebook and a sunset. “Music brings me closer to myself. When I get emotional, I write.” She’s already begun penning lyrics for her next album, reeling in heavyweights like Ron Fair (he’s produced for Christina Aguilera and The Black Eyed Peas) and Jenna Andrews (a collaborator to acts like BTS, Dua Lipa and Drake). And she’s not afraid to get personal. Today, her conviction relies more on hard work and determination than on