FOKIA highlights key parameters for economic revival, liquidity boost in the Kutch Model as a working example to tide over COVID crisis

FOKIA highlights key parameters for economic revival, liquidity boost in the Kutch Model as a working example to tide over COVID crisis

Ahmedabad, June22nd,2020: Prime Minister Narendra Modi’s special mention of Kutch’s incredible resurrection post-2001 killer earthquake, during his address to the nation in May, was not only aimed at infusing the much-needed optimism amid coronavirus-induced gloom, but also an emphatic statement that India has the potential to seize an opportunity from adversity, however catastrophic it may be. 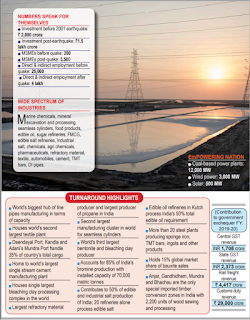 With an unprecedented industrial development in the last two decades – total investment in Kutch is nearly Rs 1.5 lakh crore and counting - the region has proved wrong the naysayers, who had given all prospects of revival a burial.

Federation of Kutch Industries Association (FOKIA), an umbrella organization of all industries of Kutch, has played a key role in ensuring a conducive atmosphere for industries to flourish by regularly representing the wants of business fraternity and raising pertinent sectoral issues with the state and central governments, along with contributing solutions and inputs in drafting key policies.

In 2001, FOKIA took the lead in urging then PM Atal Bihari Vajpayee for fiscal incentives to rebuild Kutch after the quake. Mr Vajpayee and the state government promptly agreed by announcing five-year tax holiday. This not only proved to be a game change but also a face changer for Kutch that ultimately rose from the rubble as industries started flocking to the district.

At a time when businesses are crawling to restore normalcy during pandemic times, FOKIA members continuously brain-stormed to come out with a slew of suggestions which could hasten the revival of economy and supplement PM Narendra Modi’s ‘Atmanirbhar Bharat’ campaign.

FOKIA listed out incentives required for companies who could manufacture masks, personal protection equipment (PPE) kits and other medical paraphernalia, by adhering to all Covid1-9 protocols in their units, to battle Covid-19. In May, the union government announced an incentive policy for medical equipment with a production-linked incentive of 5% on the incremental annual sale of devices made In India.

FOKIA also came out with suggestions to resolve the crisis arising out of the massive exodus of migrant workers, who are the mainstay of industries across the sectors.  As many as 50,000 migrants left for their natives from Kutch, which could have a potential impact on the two biggest ports – Deendayal Port Trust (DPT, formerly Kandla) and Mundra, which have emerged the gateways to northern hinterland.

Importantly, several sector-specific reforms suggested by FOKIA to the six-member economic revival committee formed the state government, have also been positively incorporated by the panel that is headed by former finance secretary Mr Hasmukh Adhia.

A key reform suggested by FOKIA was that regarding land use. FOKIA’S suggestions were:

done under the deemed NA provisions, which exists since 1996 but are not effective due to red-tapism.

·         Create huge Special Investment Region (SIR) in the state with plug-and-play readiness to spare investors the hassles of getting land. This will enable influx of investment

According to Mr. Nimish Phadke, managing director, FOKIA, said, “The lessons learnt from the devastating 2001 earthquake have come handy for us in this pandemic times.  We are optimistic that the model of economic rehabilitation that was executed after the earthquake can now be replicated to tide over the present crisis arising out of the pandemic. We have given a detailed draft of suggestions panning all sectors to rejuvenating the economy and many have been accepted by the state and Centre.”

Mr Phadke said the Adhia Committee has recommended doing away with restrictions on sale or leasing of agriculture land for corporates and cooperative farming. “This was suggested by FOKIA to Honourable PM and Niti Aayog three years ago. This will open up new business avenues for agro industries and help optimal use of land,” added Mr Phadke.

Adani Group chairman Mr Gautam Adani, says, “Kutch has been our karmabhoomi where entrepreneurship thrives. The history of the Adani Group is inextricably linked to Kutch as our journey towards nation building started here with Mundra Port and the Mundra Power Plant. I see the blessed region of Kutch continuing to play an increasingly important national role in the days to come.”

Other suggestions to boost liquidity for industries:

·         All power utilities should be directed to accept bank guarantee as security and huge amounts paid already should be refunded. This will enhance liquidity during this crisis

·         Reimburse wages and salaries paid to regular and contractual workers during lockdown period.

NUMBERS SPEAK FOR THEMSELVES