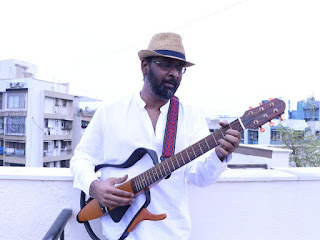 3rd July 2020, Mumbai: Singer and Composer Mohan Kannan, has always endeavored to entertain his audience with something new and has never shied away from accepting interesting projects. This lockdown, Mohan has not only lent his voice to IndraadipDasgupta’s Bengali composition“KichuShahoshDiyo”, but has also sung “Kaand” composed by Anshuman Mukherjee for the movie ChamanBahar, andan unplugged version of “Barbaadi”, Amarta Bobo Rahut’s song that was originally a part of the “Aurangzeb”soundtrack.

Shahosh Diyo is a song about lending hands during this tough period of lockdown and in the aftermath of the Amphan cyclone that hit Bengal, and just like the message, many musicians have come together to perform and sing the song.

Kaand is a situational song about the main character in the movie Chaman Bahar, and is edgy and satirical and shows a different aggressive yet fun side of Mohan’s singing.

Barbaadi originally came out in a rock format, and in this lockdown, Mohan and Bobo come together with other artists to create an unplugged, melodic version of the song.

Continuing his already popular “Soundcheck” series, Mohan collaborates with his sister, acclaimed Carnatic singer, Calcutta K Srividya, to curate a classical version of the Video Music Award winning “Sadaa”, composed originally by Mohan with Agnee for the National Award winning film “Shala” in 2012. Mohan and Srividya explore the world of Kalpana Swaras, a classical improvisation using the Sargam, with this video. They also use the complex and beautiful classical method of “Graha Bhedam” (called Moorchana in Hindustani Classical Music) to present two different ragas within the same song using Kalpana Swarams.

Mohan has always believed that music is versatile and has no boundaries, being part of a band, a mridangam player, composing and singing for Bollywood, and even singing in multiple languages like Bengali, Gujarati, Marathi, and Telugu, he’s proven, it’s the passion that counts.

Speaking about the songs, Mohan Kannan shares, “Shahosh Diyo, Kaand and Barbaadi are all songs in the popular format and have been composed and produced beautifully by the original composers. I’m super glad to have been part of such diverse soundscapes and hopefully, I’ve done justice to each of them.

Sadaa is very close to me as it’s the first time my Mother, Smt Vasantha Kannan, played violin, and my sister, Calcutta K Srividya, sang on my composition. With this Soundcheck video of Sadaa, my sister has helped me get back to my roots of Carnatic Classical music, and I’m super happy that people have really enjoyed it for varying reasons.. from the rendition of the song to the impromptu improvisations on Kalpana Swarams to the Graha Bhedam aspect that we have tried to showcase. It’s heartwarming to see the impact of Classical music on such a large audience.”