Fans saw the Royal Enfield Twins FT on track for the first time at Williams Grove Speedway in Pennsylvania, USA 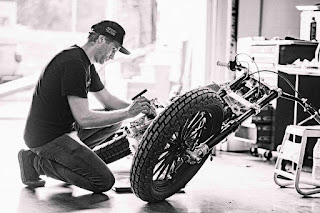 The Royal Enfield Twins FT is a joint effort between Royal Enfield and Moto Anatomy, the race team Lewis owns and operates. Over the course of the last six months, Lewis and team have worked closely with Royal Enfield, renowned road racing chassis builder Harris Performance and engine tuning specialists S&S Cycle. A major milestone in Royal Enfield’s 119 year history was reached when Lewis hit the track for the first time during this past weekend’s AFT races. In this first year, Lewis is looking to be competitive, but the overall focus remains on the development of the Twins FT platform and much of the time will be spent on making the necessary changes and adjustments throughout the remainder of the season.

“We had quite the journey to get to this point,” said Lewis. “We’ve been working consistently over the past six months to develop a competitive package for Royal Enfield. The latest iteration of the race bike was shipped over from India in pieces on Monday (September 07th) and we’ve been working around the clock to put it together. I’ve really enjoyed the development process of the motorcycle and Royal Enfield along with  the other partners involved have worked hard to make this happen. The bike performed well and we’ve got a great foundation to build upon.”

The team faced an uncertain future when the AFT season was postponed in March due to COVID-19. Not fully knowing how the year would unfold, Lewis went to work developing a prototype motorcycle early in the year. With ongoing communication, Lewis and the team at Harris Performance, Royal Enfield and S&S Cycle continued working through chassis changes and updates as Lewis tested the prototype at his Center Hill, Fl facility. Despite the challenges of shipping parts overseas and multiple time zones Lewis and team persevered. After working tirelessly for weeks, this race setting has been an accomplishment for the entire teams at Royal Enfield in India and the U.K. and also teams at Harris Performance and S&S Cycle. This year, the focus is on development and all team members are preparing to make the motorcycle even better for the next race in two weeks on September 25-26 at the Dallas Half Mile.

Joining Lewis at the Atlanta and Daytona Beach AFT rounds will be the participants of Royal Enfield’s BUILD TRAIN RACE (BTR) program, who will compete in an exhibition aboard custom INT 650 motorcycles. Lewis and team will race the remainder of the AFT calendar to gather more data and feedback on the Royal Enfield  FT package as they look ahead to the 2021 AFT season.