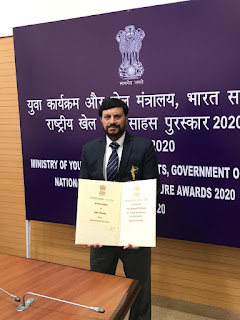 Under his training PNB hockey team has won many tournaments; the recent achievement being winner of 12th Maharaja Ranjit Singh Hockey tournament and runner-up in 93rd MCC Murugappa Gold Cup among others.

Romesh Pathania has encouraged and seeded Indian Hockey teams for thirty years and has produced world-class players. His year of hard work and conviction has been recognised and he is honoured with Dronacharya Award (Lifetime) by the Government of India.

The Dronacharya Award is given by the Government of India to recognize outstanding achievement by Indian coaches in sports, nationally and internationally.