Ahead of the much-awaited release of the Amazon Original docuseries Sons of the Soil: Jaipur Pink Panthers, team Captain – Deepak Hooda is humbled that he has given the sport and the country an Arjuna Award

Ahead of the much-awaited release of the Amazon Original docuseries Sons of the Soil: Jaipur Pink Panthers, team Captain – Deepak Hooda is humbled that he has given the sport and the country an Arjuna Award 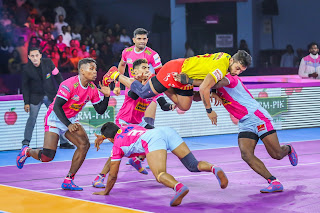 From the matti to the mats, Kabaddi has come a long way in our country. With seven successful seasons till date, the Pro Kabaddi League has placed this desi sport on the global sporting map and has also opened roadways and hope for the future champions of tomorrow spread across the length and breadth of the country and foreign shores as well. Giving a sneak peek into the tumultuous journey of the boys from the kabaddi team, the Amazon Original series - Sons of the Soil: Jaipur Pink Panthers leaves no stone unturned to bring the unfiltered story to the audiences.

Despite having received wide recognition and medals for the country as one of its best players, captain of the Jaipur Pink Panthers – Deepak Hooda blesses us with his grounded personality. Hailing from Rohtak, Haryana, Deepak, who was part of the Indian team that bagged the gold medal at 2016 Kabaddi World Cup and 2016 and 2018 South Asian Games, received the prestigious Arjuna Award in August. Speaking on the achievement, he said, “Firstly, receiving my country’s jersey itself is something that I am very fortunate about. I find myself very lucky to have received this honour as a player.”

He further adds, “I always wanted to do something that people will remember me by even after I have passed away. After receiving this Arjuna Award, my name has been written in the pages of history and I feel very humbled by it. There is no greater happiness for a player than this. I had never even thought about this, playing for my country was an honour in itself. I’ve worked extremely hard to reach where I am today I am extremely grateful for having received this award. I would like to thank my coach and team mates and all the people who have supported me and been by my side throughout my career.”

Set to stream on December 4, Amazon Prime Video’s upcoming raw docuseries, is all set to bring you the real heroes from the heartlands to your personal screens.