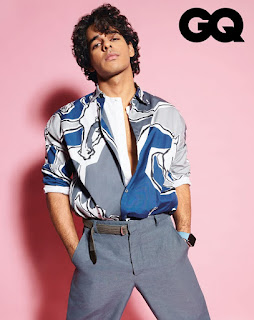 Ishaan Khatter now admits that A Suitable Boy put him in an awkward position. Literally. Briefly. Metaphorically. Sometime during last year’s lockdown, he had to complete the dubbing for BBC One’s six-part adaptation telecast here on Netflix. Like many of his co-stars in the series, Khatter had to negotiate space at home where it would be quiet, so he could record without disturbance. Sometimes, “I would be sitting in an awkward position,” he says, twisting his head sideways, mildly contorting his face, over a Zoom screen. “Also, I had to get the words right, the feelings… Perform while suspended in that position,” he adds, bending his head further. The tepid show directed by Mira Nair, which had mixed reviews and some exaggerated performances, reiterated his emergence as a standout performer of this generation, able to stand out amid an ensemble of veterans.
As a teenager, he developed interest in theatre, in world cinema, frequenting film festivals and was inevitably influenced by the burgeoning career of Shahid. His vibrant Instagram handle was one of the things that drew the attention of Karan Johar, who met him for a film that required newcomers. According to Khatter, Johar was “sussing” him all through the interview, wondering what to make of this “interesting new animal”. But while he didn’t land that particular role, Shashank Khaitan  later picked him for Dharma Productions’ Dhadak. In the meantime, when Udta Punjab’s casting director Honey Trehan got him an audition with Majidi, it seemed like fate had a role to play – Khatter had seen Majidi’s work earlier, and had hoped to work with the Iranian film-maker.
“I was largely anonymous [till then],” he says. “People didn’t know me too well. I came into the public eye at 17-18 when there was interest in me as a possible young actor. You are coloured with the traditional star family kind of understanding, image. Then you get perceived in that light rather than for who you are.” He says he’s lucky to have an elder brother who is like a father figure. Shahid was apparently relieved when he saw Khatter’s first film, because he was “scared that if I wasn’t any good, it would be difficult.” He says when the brothers get together with their mother, they talk cinema, while Shahid’s wife Mira would fall asleep on the couch because she’d had a long day with the kids and would ask them to wake her up when they were done discussing films.
His upcoming farcical-horror with Katrina Kaif and Siddhanth Chaturvedi is his first “balls-out comedy”, in which he plays a Tamil-Brahmin from Mumbai. He is aware that playing a South Indian in a Hindi film puts him up for “an entire industry waiting to point fingers”. “Phone Bhoot is a whole [different] mode of performance. Dhadak was naive, innocent and then, turmoil. Most parts have been intense, with some pathos and depth. There is no great profoundness to be found in this film at all,” he says, laughing. “Comedy is tough, though, it’s all about timing.”
He is having a blast with Chaturvedi, “playing the two stupidest people on the planet”. He finds Chaturvedi exciting as an actor, but talk of competition and for the first time he pauses. “This is where I say something cliched like ‘I am my own competitor or something like that’,” he says, cracking up. “No, but I don’t want to be too self-aware. I don’t want to be deterred by some sense of self or understanding or public perception of myself and stop getting better as an actor.”