The dream project of the citizens of Maharashtra especially Pune, Ahmednagar and Nashik will now be fulfilled, as Maha Cabinet approves the proposal of Maharashtra Rail Infrastructure Development Corporation Ltd. (MRIDC or MahaRail) in the Budget Session of Maharashtra Legislative Assembly held on 8th March, 2021. MRIDC will build a Greenfield Semi High Speed Railway Double Line with electrification between Pune and Nashik. 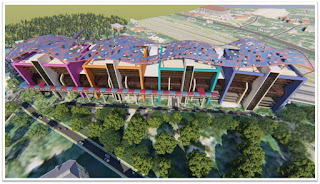 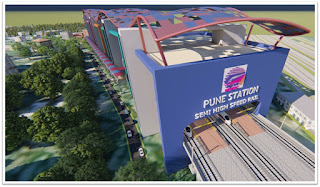 [Mumbai: 08 March, 2021] - Railway is the backbone of economic development of any country in the world. Road and Rail transport facilities have expanded simultaneously in region and countries like Europe, Japan, South Korea, Russia and China. This has led to an unprecedented opportunity to achieve the sustainability and growth which is required for the 21st century. However, in our country Road infrastructural facilities have been developed extensively as compared to Railway Lines.

The much-awaited Pune-Nashik Semi-High speed Rail Line would bring down travel time between two cities from present 06 hours to 01 hour 45 mins boosting passenger and freight movements. Thus, it will facilitate the creation of Mumbai-Pune-Nashik golden triangle as an emerging economic hub.

Earlier MRIDC had received “In Principal Approval” (IPA) from Ministry of Railways on 02.06.2020 and approval from Central Railway on 10.02.2020 for implementing Greenfield Semi - High Speed Broad Gauge Double Line between Pune and Nashik.

Shri. Rajesh Kumar Jaiswal, Managing Director, MahaRail who has authored a book "Construction and Maintenance of High-Speed Railway" and has good expertise on High-Speed Trains said – “This project will be a role model for development of new Railway Line networks in Maharashtra. This project is unique because it is the first Broad-Gauge Semi-High Speed Rail Line in India and in the world. It is designed in such a way that goods train, conventional passenger train as well as High-Speed train can run on the same route.”

The entire cost of the project has been pegged at Rs 16,039 Crore (including taxes) on Debt:Equity of 60:40 basis; wherein Government of Maharashtra and Ministry of Railway shall contribute equity of 20% each of the project cost. While remaining 60% will be raised from the Domestic Financial Institution. MahaRail has estimated to complete the project in 1200 days from the date of its financial closure.

Significant Features of this project:

·         This Semi High-Speed Train will start from new proposed Pune Railway station and it will be going to Hadapsar on elevated deck, from Hadapsar to Nashik the train will run on the ground and will go up to Nashik Road Railway station.

·         The Semi High Speed Trains will initially have 06 coaches designed to run at speed of 200 Km/Hr with future increment up to 250 Km/Hr on the Broad-Gauge line. The number of coaches will increase to 12 and then to 16.

·         The proposed alignment is designed such that there will be no compromise on speed. It is the first low cost Semi-High-Speed corridor in the country with the provision of being synchronised with existing features of Indian Railway.

·         The proposed alignment will pass through the talukas of Haveli, Khed, Ambegaon and Junnar tehsils of Pune district, Sangamner tehsil of Ahmednagar district and Sinnar and Nashik tehsils of Nashik district.

·         This Rail Line will certainly augment the revenues from the multi-fold industries like automobile hub, electronics, pharmaceuticals, sugar mills and other agricultural activities in and around the Project Influence Areas.

·         The passengers of varied travel purposes such as tourism, educations, agriculture and as well as business and daily shuttles will have ample of facilities to connect with the rest of places through this corridor.

·         All the intercity movements and transportation for both passengers and freight will flourish because of faster movement on Rail Line between Pune and Nashik.

·         The project is envisaged to yield tangible as well as non-tangible savings due to the reduction in the number of vehicles being used for transportation by roads as well as certain socio-economic benefits such as employment generation, reduction in number of accidents and reduction in pollution due to the vehicular traffic.

Other Significant projects of MRIDC

Formed with a vision to meet the growing demands for new projects and to expedite ongoing infra projects in the state of Maharashtra, MRIDC promises to address infrastructural demands in Maharashtra by providing critical connectivity and capacity enhancement. With a vision, to eliminate the Level Crossings (LC), MRIDC, within 2 years of its functioning has started construction of Road Over Bridges (ROBs), Road Under Bridges (RUBs) and Limited Height Subways (LHS) at 44 locations in Maharashtra. In the first phase, MRIDC is already constructing 69 ROBs across the state. Physical construction of ROBs has started at various locations in Nanded, Mumbai, Dondaicha, Pune, Karad, Nagpur etc.

To embark our journey in the Rail Line project works, MahaRail has started Gauge Conversion work of Nagpur (Itwari) - Nagbhid Rail Line (116 km) in December 2019. In next 16 months, Itwari - Nagbhid Rail Line shall be commissioned. Alongside rolling out Broad Gauge Line, the route will be electrified thereby ensuring faster movement of goods as well as passenger trains. Once completed the Itwari - Nagbhid section would ease congestion on the Wardha-Sewagram-Nagpur route as it has become oversaturated.